There is a stiry about a Buddhist enlightened master who was sitting by the side of the river one evening, enjoying the sound of the water, the sound of the wind passing through the trees.... A man came and asked him, "Can you tell me in a single word the essence of your religion?"

The master remained silent, utterly silent, as if he had not heard the question. The questioner said, "Are you deaf or something?"

The master said, "I have heard your question, and I have answered it too! Silence is the answer. I remained silent - that pause, that interval, was my answer."

The man said, "I cannot understand such a mysterious answer. Can’t you be a little more clear?"

So the master wrote on the sand "meditation," in small letters with his finger.

The man said, "I can read now. It is a little better than at first. At least I have got a word to ponder over. But can’t you make it a little more clear?"

The master wrote again, "MEDITATION." Of course this time he wrote in bigger letters. The man was feeling a little embarrassed, puzzled, offended, angry. He said, "Again you write meditation? Can’t you be a little clear for me?"

And the master wrote in very big letters, capital letters, "M E D I T A T I O N.

The master said, "I have already come down very much. The first answer was the right answer, the second was not so right, the third even more wrong, the fourth has gone very wrong" - because when you write "MEDITATION" with capital letters you have made a god out of it.

The master said, "I have already committed a sin." He erased all those words he had written and he said, "Please listen to my first answer - only then I am true."

Silence is the space in which one awakens, and the noisy mind is the space in which one remains asleep. If your mind continues chattering, you are asleep. Sitting silently, if the mind disappears and you can hear the chattering birds and no mind inside, a silence...this whistle of the bird, the chirping, and no mind functioning in your head, utter silence...then awareness wells up in you. It does not come from the outside, it arises in you, it grows in you. Otherwise remember: you are asleep. 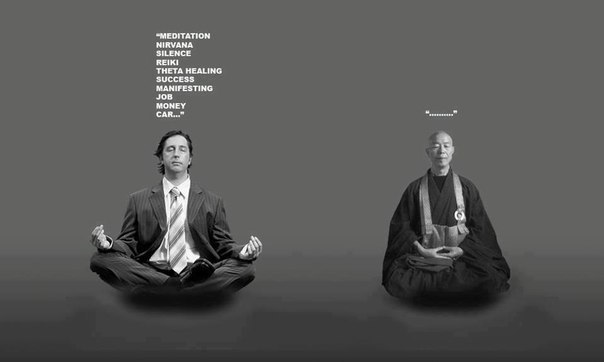